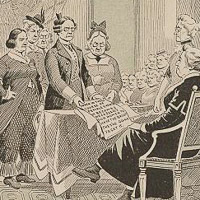 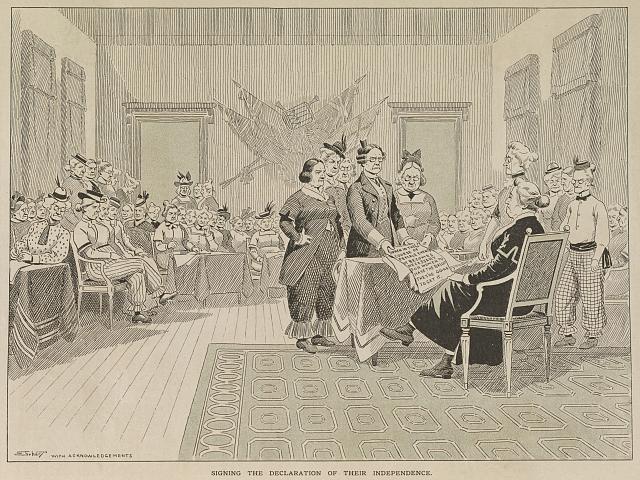 My Social Studies Methods class at the University of Portland recently published a free multi-touch iBook – Exploring History: Vol III (free iTunes). It features thirteen engaging questions and historic documents that empower students to be the historian in the classroom. For more info on our project and free download of multi-touch iBook and pdf versions click here. To better publicize student work, I’m featuring each chapter in it’s own blog post. (Ninth of 13)

The Declaration of Independence by David Deis
Download as PDF 1MB

Generative Question: How does one document influence other documents written later?

The Declaration of Independence is the founding document of the United States of America. This document has been a major influence on other events in American History. The Seneca Falls Convention was one of the founding events of the American Feminist movement. This event served to promote the early forms of feminism in America as well as give the movement a sense of legitimacy. In this lesson, students will compare the Declaration of Independence and the Seneca Falls Convention’s  ”Declaration of Sentiments.”

The Declaration of Independence by David Deis

The creation of a DBL (Document Based Lesson) has been an interesting one. Originally, I looked at the task as if I was creating a DBQ (Document Based Question) such as one that would be found on the AP US History test. However, I soon realized that this is only one aspect of a DBL. For a DBL to work, the students must answer a general question through the use of very specific source material. This hindered my generation of ideas with which to create a DBL. I eventually did decide on a solid topic: The effects that a singular event can have on another event that occurs many decades later.

To answer this question, I am having students examine the Declaration of Independence as compared to the Declaration of Sentiments. For this I have having the students read sections of each work as well as images depicting the events in question. The compare and contrast elements of the assignment are meant to help he students come to a deeper understanding that little in history happens in a vacuum. Almost everything has had some sort of influence acted upon it.

I greatly enjoyed the creating of the Book because it allows for a degree of creativity. The use of the this digital medium allows for a more interactive version of a lesson. The use of scrolling texts widgets allows the writer/teacher to place large snippets of text in a condensed area. This allows for the reading to become less daunting than a solid block of static text and it allows the creator to add in additional material—such as images—onto the page. This makes it so the students don’t have to use only text but can use the text in context/conjunction with the images.

Image credit: Library of Congress
Signing the declaration of their independence / Ehrhart with acknowledgements.
Summary:Illustration shows a group of women at a convention presenting their declaration of independence, which states “When in the course of female events it becomes necessary for women to have the ballot they’re going to get it” for the signature of a woman, possibly meant to represent the late Susan B. Anthony, seated at a table in the foreground.
Contributor Names: Ehrhart, S. D. (Samuel D.), approximately 1862-1937, artist and Trumbull, John, 1756-1843, artist
Created / Published: N.Y. : J. Ottmann Lith. Co., Puck Bldg., 1911 June 28.