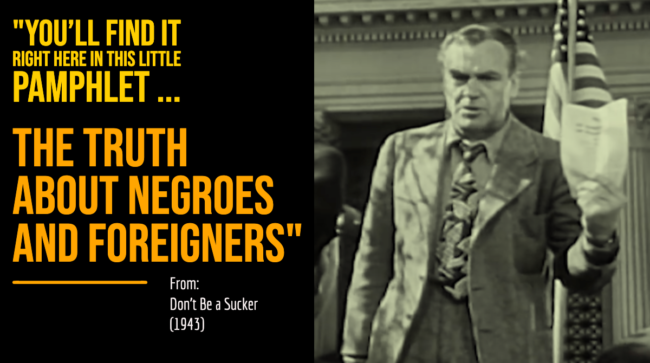 Race-baiting before social media? Here’s an excerpt from “Don’t Be a Sucker” – a short film which warns of the dangers of promoting racism in America. It was produced by the United States Department of War and released in 1943 (and adapted as a slightly shorter version in 1947.)

This dramatized film uses the experience of a Hungarian American to warn against the dangers of persecuting minorities. Reacting to a hate-filled political speech in an American city, he recalls how similar speeches led to Nazi persecution of minority groups and the eventual destruction of German society. The film was also made to make the case for the desegregation of the United States armed forces. It is held for preservation by the U.S. National Archives. Full 23 min version here.