This semester my EdMethods students used Microsoft Sway for their final lesson design projects. This document-based lesson by Gabriel Bruneau asks student to use original source documents as prompts to reflect on soldiers’ experience in WWII.

How should our society view military service and its experiences in times of war?

After you read these documents you are going to create a thesis statement in response to the essential question. Be sure to collect evidence from the text to support your thesis statement. When doing this consider whether the evidence you are choosing appeals to a reader through ethos, pathos or logos.

This semester my EdMethods students used Microsoft Sway for their final lesson design projects. This document-based lesson by Jana Peters asks student to put themselves in the shoes of an African American soldier returning to the US from WWI. Original source documents from black soldiers like Henry Johnson and Horace Pippin are used as the basis for creation of reflective journal entries.

“The history of the American Negro is the history of this strife, — this longing to attain self-conscious manhood, to merge his double self into a better and truer self. In this merging he wishes neither of the older selves to be lost… He simply wishes to make it possible for a man to be both a Negro and an American…”

To better publicize student work, I’m featuring each chapter in it’s own blog post. See more in the series here

The Real Romanovs: How media affects people’s perception of events by Kelly Marx

Kelly introduces her lesson with a generative question:How does media affect people’s perception of events?

Anastasia Nikolaevna was the youngest daughter of Tsar Nicholas II, the last sovereign of Imperial Russia. After the Bolshevik revolution of 1917, the Tzar and his family were murdered. Persistent rumors of her possible escape circulated the globe and provoked many books and films. This lesson will examine the differences between the movie “Anastasia” (1997) and what actually happened to the Romanovs and the Tsarina.

The Real Romanovs: How media affects people’s perception of events

WWI: The Human Cost of Total War by Anna Harrington 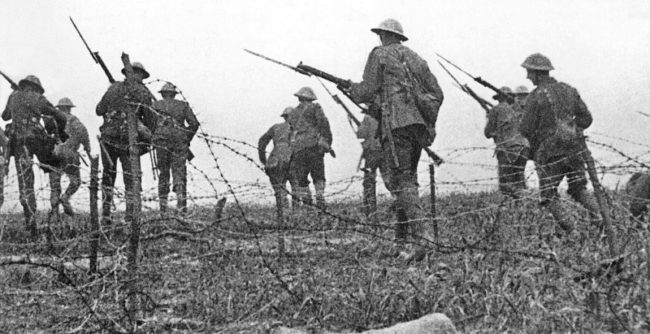 My Social Studies Methods class at the University of Portland recently published a free multi-touch iBook – Exploring History: Vol III (free iTunes). It features thirteen engaging questions and historic documents that empower students to be the historian in the classroom. For more info on our project and free download of multi-touch iBook and pdf versions click here. To better publicize student work, I’m featuring each chapter in it’s own blog post. (last of 13)

What are the different ways we can construct a narrative of this battle from the perspectives of these unique players?

The Battle of the Somme, or the Somme offensive, was the first major British offensive of WWI. It was also the most bloody, resulting in more than 57,000 British casualties in the first day. This outstripped the total number of casualties the British suffered during the Korean, Crimean, and Boer war combined. These staggering losses occurred, in part, due to a faulty strategy. The joint British-Franco force relied upon an artillery barrage that lasted several days in order to weaken the German line. However, due to the heavily entrenched position of the Germans, the artillery proved largely ineffective. When it came time to order the charge, the British command was so sure the Germans had been decimated, they ordered their men to walk – in orderly lines – across No Man’s Land. The result was pure devastation as the unscathed Germans opened up with the automatic fire of their machine guns and mowed down men line by line

Battle of the Somme by John Hunt

Reflection by John Hunt
The creation of an iBook is fundamentally different from anything I have ever done before. It is a truly strange creature, halfway between the old publishing world and the new world of digital media. This is true in more ways than one. Not only does the power of publication, and dissemination, lie in one’s own hands, the inclusion of digital media upends the traditional book format. Videos, pictures, and interactive widgets replace text. The author becomes more than a writer. Rather, they take on the role of designer and publisher as well. It is truly a democratization of the publishing process, even more so than previous online publishing platforms.

More than all of this though, it is a unique way to present history. We all know that history is dry. Although we might imagine science or even math using interactives, history has a special place in the realm of books. It is something we have always read. Part of history’s mythos, its identity as a scholarly pursuit, is sitting down with a dusty tome and discovering facts line by line. That is no longer the case. There is nothing particularly more or less intellectual or factual about reading. People listen, people appreciate art, and people watch movies. These are all valid sources of information and deserve the place in history afforded by platforms such as the book.

Despite this, the actual creation of my chapter – a reflection on the different experiences during the Battle of Somme – was fraught with a return to tradition. I am very used to writing. In middle school, I made longer and more complex sentences just to get a higher Flesch-Kinkaid grading level. Although I have come a long way since then, it is still the medium I am most comfortable communicating with. The comments I received on the rough draft of my chapter reflected this. They all revolved around the same themes: less text, break things into chunks, make the questions easier, and more. Obviously, I will have some difficulty thinking of a book as more than just a medium for words.

Even so, I was very happy with the eventual outcome of my chapter. It is minimal. There are no fancy widgets, less pictures, and more text. Yet I believe I have struck a good balance. It is a balance between the old and the new, the traditional format and the possibilities of a digital one. However, it is also a balance between two more simple concepts. Words still have a fundamental ability to communicate the human experience like no other medium. To close, let me reflect on the quintessential saying a picture is worth a thousand words. Although the basic premise holds true, it is far from being the case in all instances. In today’s media saturated social spheres, the power of the image is incredibly diminished. We are used to images representing the shallow, crass demands of a consumer marketplace that demands our constant attention. In this new world, the power of words to speak to our innermost emotions, remains un-belied – and perhaps even more powerful.

Image credit: Scene of British troops advancing, staged for the film “”The Battle of the Somme” Wikipedia