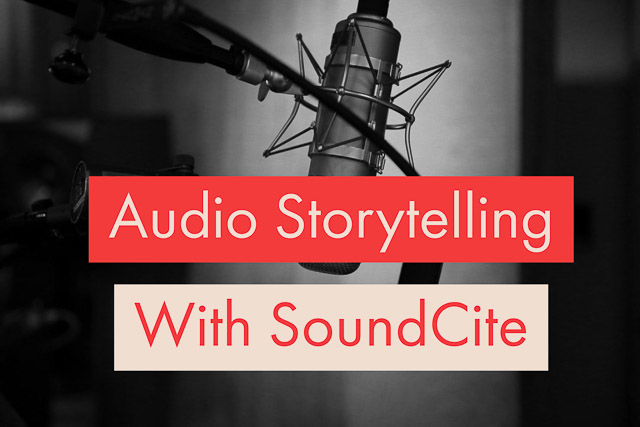 My University of Portland students recently completed a PBL project, designing curriculum for the Oregon Holocaust Memorial. More here. We used a variety of free online storytelling tools to contextualize the Holocaust for memorial visitors.

I like to collaborate with my students in our projects, so I created a web section called Voices. It features inline audio oral history clips of survivors talking about family members murdered in the Holocaust. Working with the Oregon Jewish Museum and Center for Holocaust Education (OJMCHE) I  extracted the clips from their rich oral history archives.

I used a free tool called SoundCite.  KnightLabs describes it this way: Audio is a powerful device that can add emotion or context to a story. Unfortunately audio clips force uncomfortable choices: read or listen, but not both. Until now. SoundCite is a simple-to-use tool that lets you add inline audio to your story. The audio is not isolated; it plays right under the text.

Here’s a demonstration of SoundCite using a portion of an interview with Anneke Bloomfield. She was born on April 19, 1935, in The Hague in the Netherlands. Anneke’s father worked for Shell Oil, while her mother (a retired schoolteacher) stayed at home with Anneke and her three brothers. Anneke also had a younger sister who was born right at the end of the war.

“Well there was another incident before this. My dad was in the underground and he had me send messages to certain people a couple times. And one time on my way home, I had to be home before 8:00 because they would shoot – Germans always changed rules, every time – no more light at this time, no more heat, no more this, no more that. And this time anybody who was on the street after 8:00 would be shot. And this was about the third time I did this message thing for my dad. And as I got to the underpass there were two German soldiers and they had picked up two Jews or whatever; it looked like men from a distance for me. And they thought it would be a good place to break loose. And instead they didn’t get away with it so they was pushed up against the wall and they were killed. And now I have to go underneath there. And I am like eight and a half going on nine, and I was so afraid to go, so I thought, “Well I am going to turn around a take the long way home.” So I ran and ran and ran and I thought, “Oh I hope I am going to make it before 8:00.”