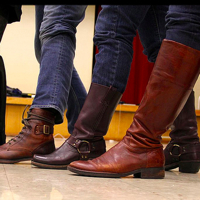 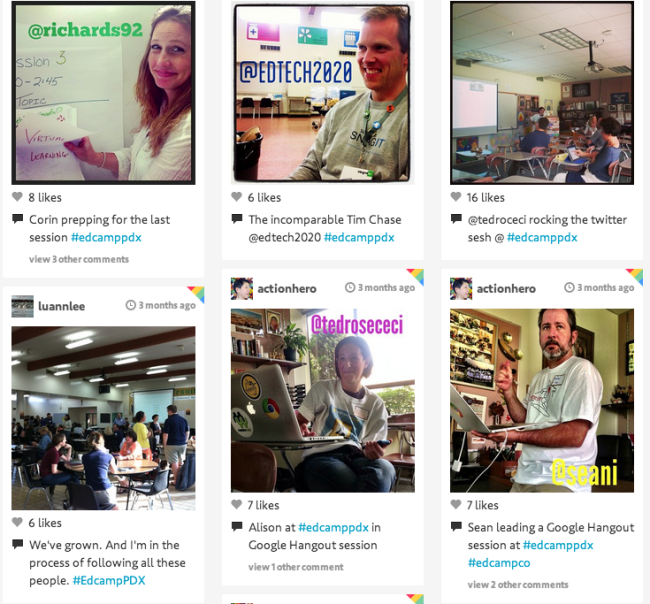 Calling all educators! Here’s your excuse to come to Portland Ore and have a great time while expanding your PLN. I’ll be there with a very talented group of Pacific NorthWest educators who are interested in sharing ideas for creating engaging classrooms. You’ll have a good time and leave with loads of great ideas for the classroom.

Join us for EdCampPDX, the FREE, unconference-style, collaborative, educator-driven, customized professional development day. Enjoy a day of sharing ideas, networking, and collaborating with your peers – teachers, administrators, pre-service teachers and anyone interested in teaching and learning.
Lunch is provided by an awesome sponsor. And yes, there are door prizes, including an Apple TV.

Photos from previous edcampPDX
Follow Twitter updates at #edcampPDX
Join the edcampPDX Google Group to network and keep up with our news and notes.

Here’s a few of the sessions we’ve got planned so far – but it’s an edcamp, so who know what else we’ll add when we get there?

Invite your friends, colleagues, and administrators by simply forwarding this email!
Sign up here and while you’re there, please add your session ideas on the session page.

Invite your friends, colleagues, and administrators! Hope to see you there!

Cool boots from November’s edcampPDX. But it’s summer, I’ll bet we’ll all be in flip-flops. 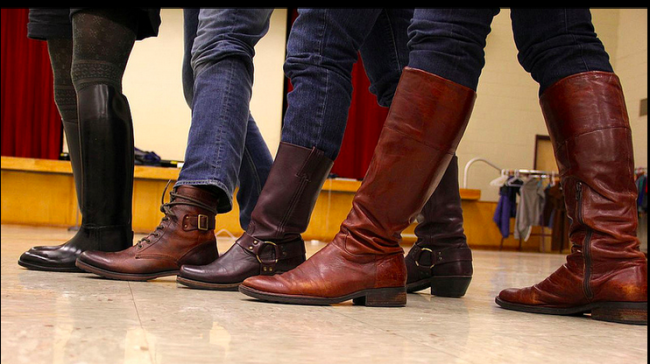 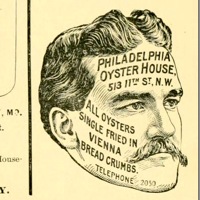 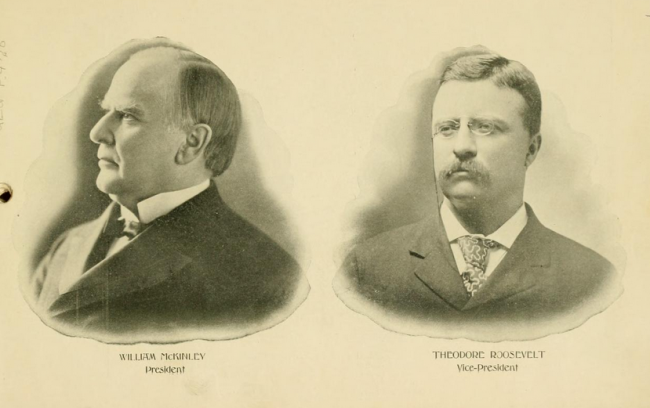 With the 2013 inauguration nearly upon us, it’s interesting to look at the Official Souvenir program of President McKinley’s inauguration in 1901. Full document here

Especially interesting is the two-page prediction of the Presidential Inauguration of 2001. The unnamed writer was caught up in visions of Manifest Destiny and technology – mechanical bands, a president from the state of Ontario, a flying parade of aerialautos, altering the flow of the Gulf Stream to effect climate chance, and an expanded US with 118 states and 91 territories extending into South America. Quite a contrast to the program ad claiming to provide  ”Fresh Air – No Cinders! No Smoke!” for rail cars of 1901.

Here are some excerpts from the program (see full pages below)

“George McKinly Barrington, of the State of Ontario, was today at high noon invested with the office of President of the United States of the Americas. … President Barrington is the tenth Chief Magistrate to be elected to the new term of eight years, and he was accorded such a reception as has never before been witnessed in this city.

The anti-trust law prohibiting any corporation from making profits in excess of 6%, per year, should be strictly enforced.

The inaugural parade was thirty-six miles in length, and despite the fact that those participating were carried in aeroplanes, aerialautos, and other conveyances from the Mansion of Executives to the Capitol, the line occupied more than three hours in passing the State aerialtrans, and slightly delayed the programme as originally proposed. The State aerialtrans left the Mansion of Executives at 9 o’clock, and was stationed at the head of the Avenue of the Americas, down which, at an altitude of about 300 feet from the pavement, the parade approached.

… Every city in the Union was represented in the parade by one or more conveyances, and the decorations were unique and beautiful. Among the finer displays were those of clubs from Sitka, Santaigo de Chile, Montreal, Rio de Janerio, Mexico City, Havana, Manila, Honolulu, Quebec, St. Thomas, Chicago, and New York. 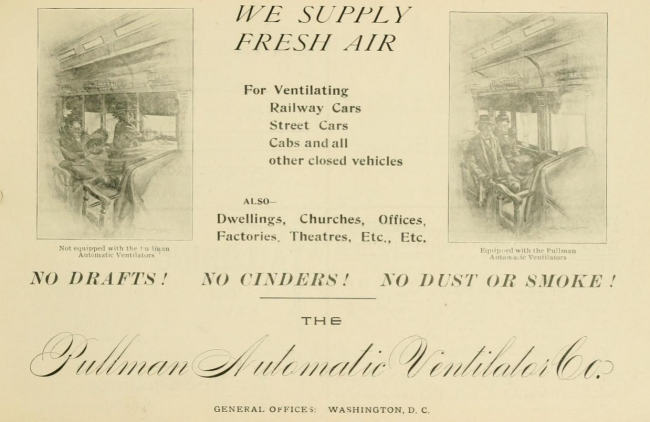 … It was a distinguished throng— the forty members of the passing Cabinet, the Supreme and Vice Supreme Courts, the 336 Senators, 860 Representatives, 99 Territorial Delegates and scores of statesmen, and Army and Navy officials being present.

Escorted by hundreds of statesmen, the new and the old Presidents made their way to the platform facing the Crystal Auditorium The four great mechanical bands struck up the national anthem and the vast gathering cheered itself hoarse. As the candidate of the American party and the choice of all three Houses of Congress, Mr. Barrington is very popular…

His speech was remarkable for its brevity, and yet for the numerous recommendations made. Among these is the suggestion that the work of turning the Arctic current aside, off the coast of Labrador, so as to enable the Gulf Stream to change the climate, be begun at once, and that the anti-trust law prohibiting any corporation from making profits in excess of six per cent, per year, be strictly enforced. 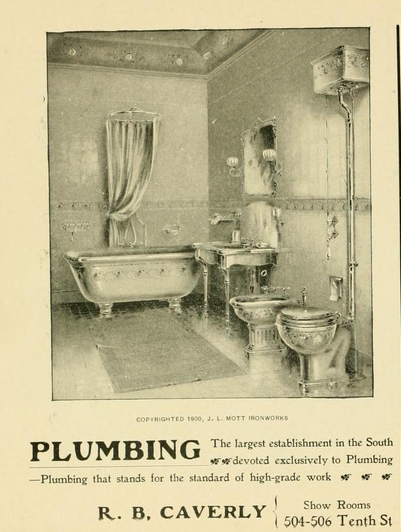 At the close of his address. President Barrington was escorted to the Mansion of the States by the Governors of the 118 States and 91 Territories.

… The programme included a parade of the President’s Guard (foot) and the crews of the naval submarine and aerial vessels Hector, Dewey, Schley, Sampson, Buenos Ayres and Holland. The evolution of the aerial forces with the new meteorite guns were deservedly applauded, and the great tubes were raised and lowered by the Operation of the gas in the jackets. The Pneumatic street railway lines were stopped on all surface tracks and the avenues kept clear.

Later, at 16 o’clock, and lasting until 18 o’clock, an Old Century” parade was made the feature, and created much merriment In the grotesque line were ancient vehicles known as “automobiles,” “locomobiles” and “glides.” Other features were “bicycles” from the Museum of the Americas, and an electric street car from the New York State Museum. Ancient steam engines found in the States of Manitoba and Assiniboia were conveyed oil pneumatic drags.

Hat tip to Politico for pointing me to this document. 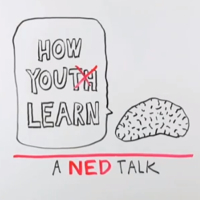 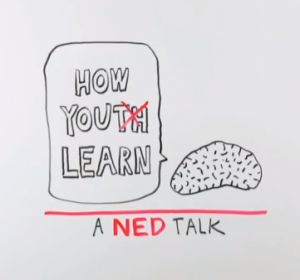 This clever and fast-paced 6-minute animation provides insights into how teenagers learn. An “insider’s guide” to the teenage brain, it answers the question – “If you were a teenage speaker brought in to address a crowd of teachers on the subject of how you and your peers learn best . . . what would you say?”

Done in hand-drawn whiteboard / voiceover format it sets out eight essentials for learning, including my favorite – reflection. Share it with your students and see if they concur or use it as a discussion starter for your next faculty meeting. 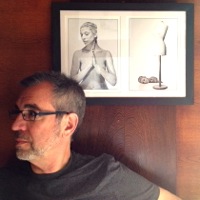 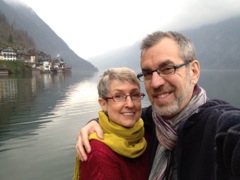 Regular readers know that this is not a travel blog. But my wife and I are traveling and I thought I’d share a few observations and thank you’s to some of our hosts.

While in Munich, we took a long walk along a creek through the Englischer Garten. At the south end of the downtown park we came upon the creek inlet (the Eisbach, a small canal) and were surprised to find surfers. Here’s my brief tribute made using Viddy and my iPhone.

Hallstatt Austria, is a picture perfect UNESCO world-heritage village perched between a mountain and a beautiful lake. We only spent one overnight there, but it was enough time to see why the city is such a big hit in China. We found out from a local shopkeeper that Chinese investors are building a replica in China. Here’s my Photosynth of the [actual] Hallstatt town square from our hotel room.

Trieste Italy is a city usually overlooked for Venice, it’s more glamorous neighbor. As one Italian shopkeeper in Verona quipped – “Is it in Italy?” We found Trieste to be a colorful mashup of Italian -Slovenian – Austrian food, architecture and culture. We stayed at a terrific hotel – Albero Nascosto. It’sl is a loving restoration in the old city, steps away from all the major attractions. Breakfasts feature local delicacies but the real assets are the owners and staff. A special shout out to Julio. He gave me lift from the parking garage on the back of his scooter and a quick tour of his neighborhood.

Verona Italy has great art, food, architecture, and shopping in a walkable and historic central city. We spent a few days exploring all of the above based in Tenuta Delo Relais - a agriturismo only a short 15 minutes drive out of the historic city center. Delo is an idyllic restored farm house set high on a hill and surrounded by a working vineyard. A big thanks to our gracious hosts – Ettore and Antonia.

While visiting Verona’s Duomo, I suddenly heard beautiful choral music. A recording? Then I noticed a woman conducting a group of students. I never found out who they were – all I was told was they were “Russian school girls.” (I think you could safely add “choral” to that description.) Right after this song they got up and quietly left.

One more must-see in Verona is the Castelvechio Museum – as if this view (below) from the castle keep isn’t enough – the entire complex houses a first class art collection in a restoration that imaginatively blends historic and modern design elements. 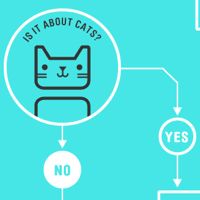 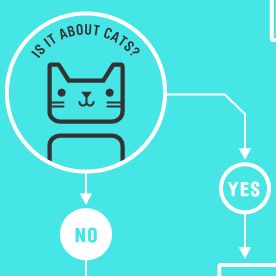 As I’ve previously posted, filtering information and maintaining focus may be one of the most critical new literacies. Emails are at the top of my “needs better filtering” list.

And no, I’m not talking to spammers. Friends, family, clients – I’m talking to you. To begin with, why don’t you at least consider updating the subject lines of our emails after a reply or two.

OK enough venting. I thought you’d enjoy this infographic which offers guidance for email hygiene in the work place.

Actually its more of a decision tree than infographic, but it does have a cute kitten.