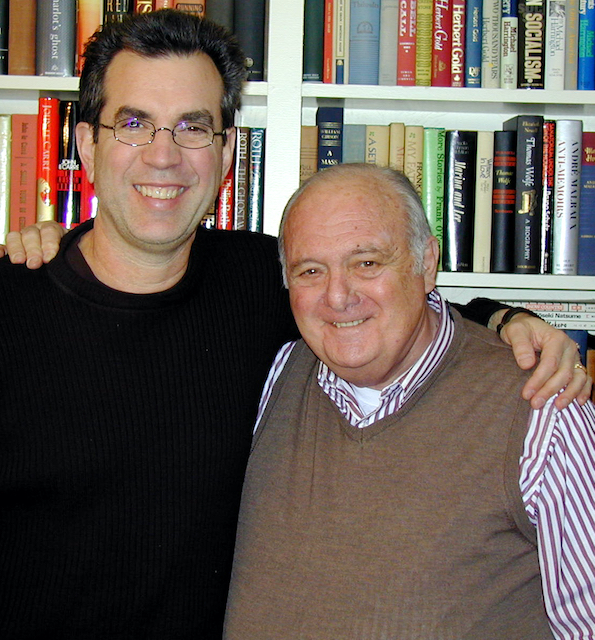 Two weeks ago, I lost a very important person in my life. For more than 25 years Abe Rothberg served as friend, mentor, surrogate father and personal curmudgeon. Over long lunches in diners or late afternoons in his study we’d discuss politics, history, literature, journalism and gossip about everyone we knew.

By the time I met Abe in the early 1980’s he had many achievements – a distinguished career as a journalist, university professor and author of thirteen novels, two books of history, a collection of short stories, two children’s books, and a volume of literary criticism. Abe was the most learned (and opinionated) person I ever knew. While I never saw Abe in the classroom, he was beloved or feared (or both) by legions of English literature students from his days teaching at Hofstra, Columbia and St. John Fisher.

For more on Abe’s accomplishments see the New York Times obituary
Abraham Rothberg, Who Wrote of Golem and Stalin, Dies at 89

Following his retirement from teaching, I knew Abe hoped to devote more time to his writing. There were some successes – like an occasional journal piece,  but many of our lunches were punctuated by his growing disappointment that yet another book manuscript had been rejected. So beginning around 2000, I began to try to convince Abe that we could use new print-on-demand technology to by-pass the big publishing houses and do it ourselves. “I will never stoop to vanity press,” he’d bellow.

I pressed on and a few years later (did I say he was stubborn?)  I convinced him to let me publish The Holy Warriors a novel that had been rejected by a few publishers despite the fact that it had, in a way, anticipated 9/11. “OK Abe, let’s get this started – give me the Word doc of the book and I’ll get going on design.” Abe replied, “What’s a word doc?” (Did I mention that Abe refused to even LOOK into a computer screen?) So before beginning work on book design, step one was finding someone who was willing to scan / proof  his typewritten and heavily edited manuscript into OCR.

Eventually the book was finished and sent off to Lulu for publication. I’ll never forget bringing the finished paperback to Abe. He took the book in his thick hands and kept turning it over  – like a baker patting down dough. His face beamed as he asked,  “So when do we get started on the second book?”

Over the next six years we published another twelve books. (That’s right – all 12 started as typewritten manuscripts.) The scope was a remarkable testimony to the breadth of Abe’s interest and expertise – collections of  short fiction On A Darkling Plain, essays and literary criticism What Time Is It Now? novels set in Japan The Torii Gate and the Soviet eastern block The Former People. Subject ranged from a children’s story – Pinocchio’s Sister ~ A Feminist Fable  to an exploration of the justice system through the lens of a serial killer The Trials of Arthur John Shawcross.

In 2010, a group of his friends held a tribute to Abe  – the man and his writing – as part of a Jewish Book Festival. Here’s an excerpt of the reflection that Abe shared with us. (I learned he always liked the last word)

… Serious fiction is a lie that tells the truth. Fiction can introduce you into the lies and truths of other people’s minds and hearts, to your own country and time, or strange, foreign places and other eras, into the most public forums and the most private scenes of human intimacy; it can make you see, hear, feel, love, hate, forgive, judge, understand, and yet not be bound by the consequences of all those activities, though you are there as a participant-observer in the most personal and informed ways. … And so, tonight, you will hear some of the lies I have written I take to be important truths, serious fictions about our lives and times. I thought my books might contribute to the cultural and political conversations and dilemmas of our epoch. If that has not taken place as I wished– and I am sorry to say it has not–it was not for the want of my trying.