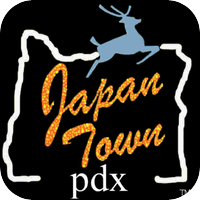 I’m pleased to introduce you to Japantown PDX, a free iPhone app that I designed with the assistance of the Oregon Nikkei Legacy Center, GammaPoint LLC, and my students at the University of Portland. Explore Portland Oregon’s historic Japantown with this user-friendly walking tour. The city’s vibrant pre WWII Japanese American community is archived in over 125 photographs and audio clips. This GPS-enabled app guides you through Portland’s eight block Japantown, a bustling community in the early decades of the twentieth century – better known today as the colorful Old Town / Chinatown neighborhood. Map 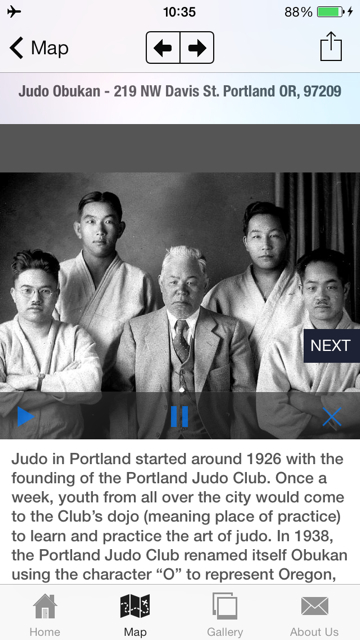 The free iOS app documents the vitality of this once thriving “Nihonmachi” and its sudden disappearance in the spring of 1942 when all persons of Japanese ancestry were removed from the West Coast and placed in America’s concentration camps during WWII. In addition to telling Portland’s Japantown story, the app explores the remarkably diverse Old Town neighborhood in tour stops that honor its African American, Chinese and LGBT roots.

Todd Mayberry, the Director of Collections and Exhibits at Nikkei Legacy Center speaks to the role this app can play in promoting the historic importance of Portland’s Nihonmachi and the need to preserve it from the ever-present threat of historically inappropriate over development.

“This innovative app will guide users beyond the walls of our museum and into the heart of Portland’s historic Japanese American community. Explore our streets and buildings guided by our narrator and mapped collections of photographs. We can’t wait to welcome you back to our home.”

App Features
Our goal was to design a user-friendly app suitable for all technical “abilities.” We began by surveying the Nikkei Center’s rich collection of historic photos for location-specific images. The most notable and well-documented became our tour stops. When we had historic exterior shots we photographed the contemporary scene replicating the view. Thus users can watch historic Japantown street life reappear in “then and now” dynamic photographic dissolves. Each stop has multiple historic and contemporary images, text and an audio narration. We had many historic photos that told the story of a vibrant community, but they lacked location. We decided to include them in the app as a “Gallery Section.” The app also allows users to share image content with built in Facebook and Twitter buttons.

We also wanted to weave in an underlying narrative – the story of WWII’s Executive Order 9066, the forced incarceration of the neighborhood’s Japanese Americans first at the “temporary” Portland Assembly Center and eventually at the Minidoka concentration camp located in southern Idaho. While the app is location based, we elected to give it an narrative arc that begins with an opening audio greeting voiced by Jean Matsumoto who grew up in the pre-WWII Japantown. Jean and her family were among over 110,000 Japanese Americans that were removed from the West Coast and incarcerated without trial. The app details other stories of forced relocation and re-population of the the neighborhood after the war and invites users to learn more by exploring the exhibits at the Nikkei Legacy Center in the heart of historic Japantown. Map 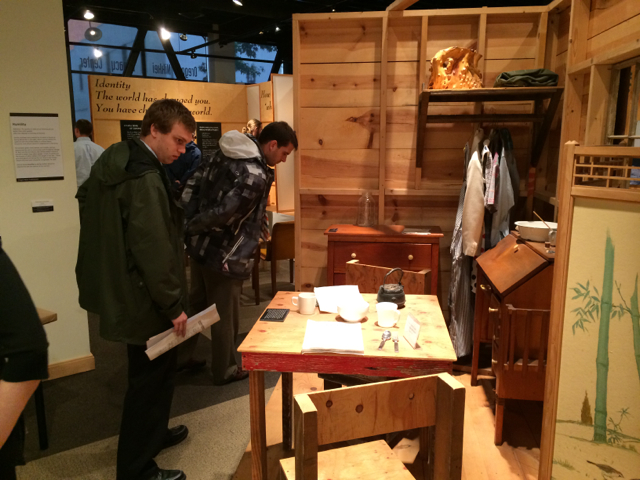 About the Project Team
This app grew out of a collaboration between my Social Studies Methods class at the University of Portland and the Nikkei Legacy Center. It was one of three curriculum design projects undertaken by students in support of the museum’s educational outreach. For more see my post Student Consultants Design Museum Curriculum and Mobile App. 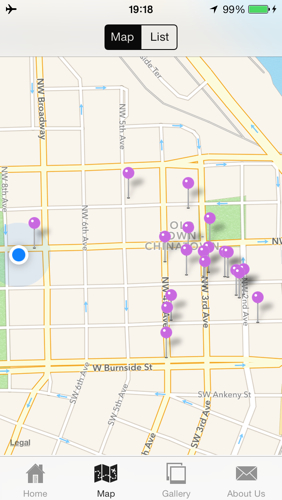 My class served two roles in the app development – the entire class became our focus group – discussing what they thought needed to be in the app – both from the perspective of user experience and their growing knowledge of the history of Portland’s Japantown. Three student’s worked more directly – narration (Aram Glick), audio recording (Collin Soderberg-Chase) and logo (Samuel TS Kelly). I worked closely with Todd Mayberry to select content and images.

The other key team member was GammaPoint LLC a Portland-based mobile app developer and designers of my favorite workout app - WeatherRun. GammaPoint was interested in designing a user-friendly platform that would allow organizations to develop their own tour apps with a minimum amount of assistance. Our project served as their beta. We worked with GammaPoint on developing the tour design, generating prototypes which were then evaluated by my students and Nikkei Center. For example, we discovered that while we had a wealth of video interviews of former Japantown residents, their file size bloated the app. We used plist files to upload data to GammaPoint and tested their new web-based upload tool. It has now evolved into GammaPoint’s App4Tour which promises to be an affordable way for users to create their own multi-media rich tours with minimum of technical assistance. 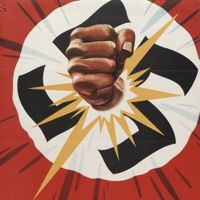 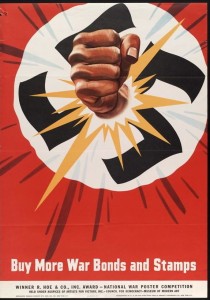 I assigned my preservice teachers at University of Portland the task of using Learnist to design a document based question that would eventually become part of a class-produced DBQ iBook collection. DBQ assignment here. More samples of student-designed DBQs here.

I’ve asked them to reflect on the assignment and invited them to guest post on my blog. Here is Image and Emotion – WWII Propaganda Posters – a DBQ designed by Aram Glick.

You can find Aram at LinkedIn and here’s his posts on our class blog. See Aram’s chapter in our class-designed iBook – free at iTunes

Aram Glick reflects on what he learned from the experience:

When I began this project, I expected that choosing documents for a DBQ would be easy, while writing the text and questions to accompany them would require the greater effort.

As it turns out, the effort came in keeping myself terse. The fundamental question in this project was “what do you want the reader to do?” Once I decided that the reader would examine propaganda posters and analyze what emotional impact they had, it became clear that my main task would be curating the posters themselves. Too much text would only distract from the real focus of the DBQ. Thus, I tried to limit myself to minimal introductions to set the frame, and one or two open-ended questions.

It seems to me that simplicity is at the heart of the DBQ format. As long as the reader is oriented, the documents, visual or textual, should speak for themselves. I’ll keep this principle in mind not only when designing formal DBQs in the future, but when presenting primary documents to students in a classroom context.

There are many DBQs out there relating to World War II propaganda, but few ask the reader to look across cultures for parallel concerns.

I’m satisfied with the final project: its narrow focus has allowed it to stake out its own niche. There are many DBQs out there relating to World War II propaganda, but few ask the reader to look across cultures for parallel concerns. Still, this project only scratches the surface: the five propaganda themes I included are hardly the only possible points of comparison. I hope readers find this to be a source of ideas and inspiration for other projects.