We designed resources to enhance the visitor experience to the Memorial. Two of my students used different online StoryMap tools that invite a comparison. Both are easy to use and do a good job of pairing content with location. The added feature of KnightLab’s StoryMapJS is that it has a built in timeline.

David Grabin used KnightLab’s StoryMapJS to tell the story of Menachem “Manny” Taiblum a Holocaust survivor who escaped the Warsaw ghetto, fought alongside the Polish resistance, resettled to Palestine, moved to Brazil, then to New York City and eventually settled in Portland, Oregon.

David writes: I downloaded pictures from websites like Wikicommons and Flickr. These sites have photos that are within the public domain and have usage rights that permit them being re-published. Even though they are public domain, I made sure to cite them if the author requested it. I picked points on a world map that approximated stops on Manny’s journey, and in each location I added an image and blurb containing excerpts and paraphrased info from his interview. After editing the final product, the project was ready to be added to the website. Direct link to map

Nancy Guidry choose ArcGIS Story Map. It’s built into ArcGIS, a leading mapping and GIS platform. It’s available to anyone with a ArcGIS account, but you can also sign up for a free non-commercial ArcGIS public account or sign in with your Facebook or Google credentials. The site provides a variety of templates to showcase different types of stories. Once you have an account, you will get a “My Stories” page to manage your maps.

Nancy writes:  I used ArcGIS Story Maps to create this map of concentration camps throughout Europe. I used data provided by the Oregon Jewish Museum to input location and death data for each camp, and found photos from each camp online. The embedded version does not look as nice as the original; click here for a direct link.

This past semester my social studies methods class at the University of Portland partnered with the Oregon Jewish Museum and Center for Holocaust Education (OJMCHE) to design curriculum for the Oregon Holocaust Memorial in Washington Park here in Portland Ore. With historical memorials in the news and neo-Nazis on the march, this community-based challenge inspired my students to use a PBL approach to explore instructional design with purpose.

We explored the Holocaust Memorial and the Oregon Jewish Museum reflecting on how we could provide contextual information to enhance the visitor experience to the Memorial. Working with April Slabosheski, the OJMHE Manager of Museum and Holocaust Education, we envisioned interactive resources that would benefit a busy teacher bringing middle and high school students on a field trip to the Memorial. We knew that the same tools would be useful to any visitor to the memorial. 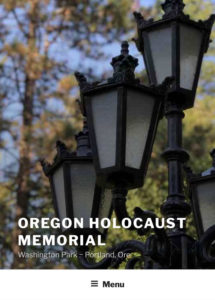 We designed a WordPress site - Oregon Holocaust Memorial to host the resources. Students used their class experience using a variety of storytelling tools from KnightLabs to create new content for our Memorial site. Other apps were integrated into the site included: ESRI StoryMap, ThingLink, SlideShare, Apple Keynote, iMovie and Garage Band.

Place by Nancy Guidry offers insights into the geography of the holocaust. Nancy used JuxtaposeJS and ArcGIS Story Maps.

Time by James Bayless and Kelly Sutton features a timeline made using TimelineJS.

People by David Grabin and Taran Schwartz details both the millions murdered in the Holocaust and the stories of some of the survivors. It was made using StoryMapJS and Apple Keynote.

Visit by Paxton Deuel orients visitors to the site with an interactives made using ThingLink and Apple Keynote / SlideShare.

I like to collaborate in these projects, so I created a section called Voices. It uses SoundCite to add inline audio oral history clips of survivors talking about family members murdered in the Holocaust.

Paxton Deuel wrote a reflection on the project that captures the power of PBL:

What separates project-based-learning (PBL) from other instructional techniques, is that at the end of the day, after grades, and feedback, and anxiety filled finals week, students (that’s us) are left with a product that extends beyond the classroom. In this case, the product is the Oregon Holocaust Memorial website. But just imagine, if most classes were project driven, how many meaningful and authentic contributions could students produce? The possibilities are endless.

A common complaint of higher education is that it exists in a vacuum. A protected environment insulated from the demands of the real world. Professors and students fill their time with hypothetical musings and idyllic aspirations for the future.... PBL bridges the gap between academia and “real life” by giving students the opportunity to create products that will be used outside of school, outside of the university bubble. This makes the school work both meaningful and productive, qualities that every student should strive for–from pre-schoolers to Ph.D’s.

My University of Portland students recently completed a PBL project, designing curriculum for the Oregon Holocaust Memorial. More here. We used a variety of free online storytelling tools to contextualize the Holocaust for memorial visitors.

I like to collaborate with my students in our projects, so I created a web section called Voices. It features inline audio oral history clips of survivors talking about family members murdered in the Holocaust. Working with the Oregon Jewish Museum and Center for Holocaust Education (OJMCHE) I  extracted the clips from their rich oral history archives.

I used a free tool called SoundCite.  KnightLabs describes it this way: Audio is a powerful device that can add emotion or context to a story. Unfortunately audio clips force uncomfortable choices: read or listen, but not both. Until now. SoundCite is a simple-to-use tool that lets you add inline audio to your story. The audio is not isolated; it plays right under the text.

Here’s a demonstration of SoundCite using a portion of an interview with Anneke Bloomfield. She was born on April 19, 1935, in The Hague in the Netherlands. Anneke’s father worked for Shell Oil, while her mother (a retired schoolteacher) stayed at home with Anneke and her three brothers. Anneke also had a younger sister who was born right at the end of the war.

“Well there was another incident before this. My dad was in the underground and he had me send messages to certain people a couple times. And one time on my way home, I had to be home before 8:00 because they would shoot – Germans always changed rules, every time – no more light at this time, no more heat, no more this, no more that. And this time anybody who was on the street after 8:00 would be shot. And this was about the third time I did this message thing for my dad. And as I got to the underpass there were two German soldiers and they had picked up two Jews or whatever; it looked like men from a distance for me. And they thought it would be a good place to break loose. And instead they didn’t get away with it so they was pushed up against the wall and they were killed. And now I have to go underneath there. And I am like eight and a half going on nine, and I was so afraid to go, so I thought, “Well I am going to turn around a take the long way home.” So I ran and ran and ran and I thought, “Oh I hope I am going to make it before 8:00.”

I’m very pleased to share a new multi-touch iBook just published by my Social Studies Methods class at the University of Portland. Exploring History: Vol V was our PBL capstone and is available free at iTunes in 51 countries around the world. It features these World and US History lessons:

This book is the fifth in a series of "Exploring History" titles designed by my UP preservice social studies teachers. The books have been very popular - with over 30,000 downloads from nearly two dozen countries. Writing for an authentic and global audience has been one of the prime motivators in this on going publishing project.

It features six engaging questions and historic documents that empower students to be the historian in the classroom. The units draw from a fascinating collection of text and multimedia content - documents, posters, photographs, audio, video, letter and other ephemera. "Stop-and-think" prompts based on CCSS skills guide students through analysis of the primary and secondary sources. Essential questions foster critical thinking. All documents include links back to the original source material so readers can remix the content into their own curated collections.

All of my student's wrote for a public audience on our class blog and pursued three class goals:

The lesson design process began early in the semester when students designed lessons in historical thinking skills based on the work of Sam Wineburg and the Stanford History Education Group (SHEG). They focussed on three key skills – Sourcing, Contextualizing and Corroborating. Then students identified essential questions worth answering and gathered documents to explore the question.

Here's a post (from fall '13 class) that describes our project workflow (including how we utilized iBooks Author). The Exploring History includes four additional volume

This fall my social studies methods class at the University of Portland will work with the Oregon Jewish Museum and Center for Holocaust Education (OJMCHE) to design curriculum for the Oregon Holocaust Memorial in Washington Park here in Portland Ore. With historical memorials in the news and neo-Nazis on the march, this community-based challenge will allow my students to use a PBL approach to explore instructional design with purpose. The lessons learned will serve them well in their careers as secondary social studies teachers.

“Why do we build memorials? Why/ what do we need to remember?
~ Nancy Guidry, student.

My students will team with OJMCHE Holocaust Educator, April Slabosheski to create lessons to support middle and high school visits to the Memorial. I invite readers to follow our progress here and at our class blog. We welcome your advice, suggestions and encouragement.

After our first visit to the memorial I invited students to share their reactions:

More on the Oregon Holocaust Memorial:

The Oregon Holocaust Memorial was dedicated on August 29, 2004. The memorial features a stone bench adorned with wrought-iron gating, screened from the street by rhododendron bushes. The bench sits behind a circular, cobblestoned area - simulating a town square. During the Holocaust, many Jewish families were gathered in town squares before being loaded onto trains and taken to concentration camps. The square contains scattered bronzes of shoes, glasses, a suitcase, and other items to represent everyday objects that were left behind. A European-style, cobblestone walkway with inlaid granite bars, simulating railroad tracks, leads to a wall of history panels - giant, stone placards that offer a brief history of the Holocaust and quotes from Holocaust survivors. At the end of the wall is the soil vault panel. Buried below the panel are interred soil and ash from six killing-center camps of the Holocaust - Chelmno, Treblinka, Sobibor, Belzec, Majdanek, and Auschwitz-Birkenau. The back of the wall is engraved with the names of people who died in the camps, followed by the names of their surviving relatives in Oregon and SW Washington. Source