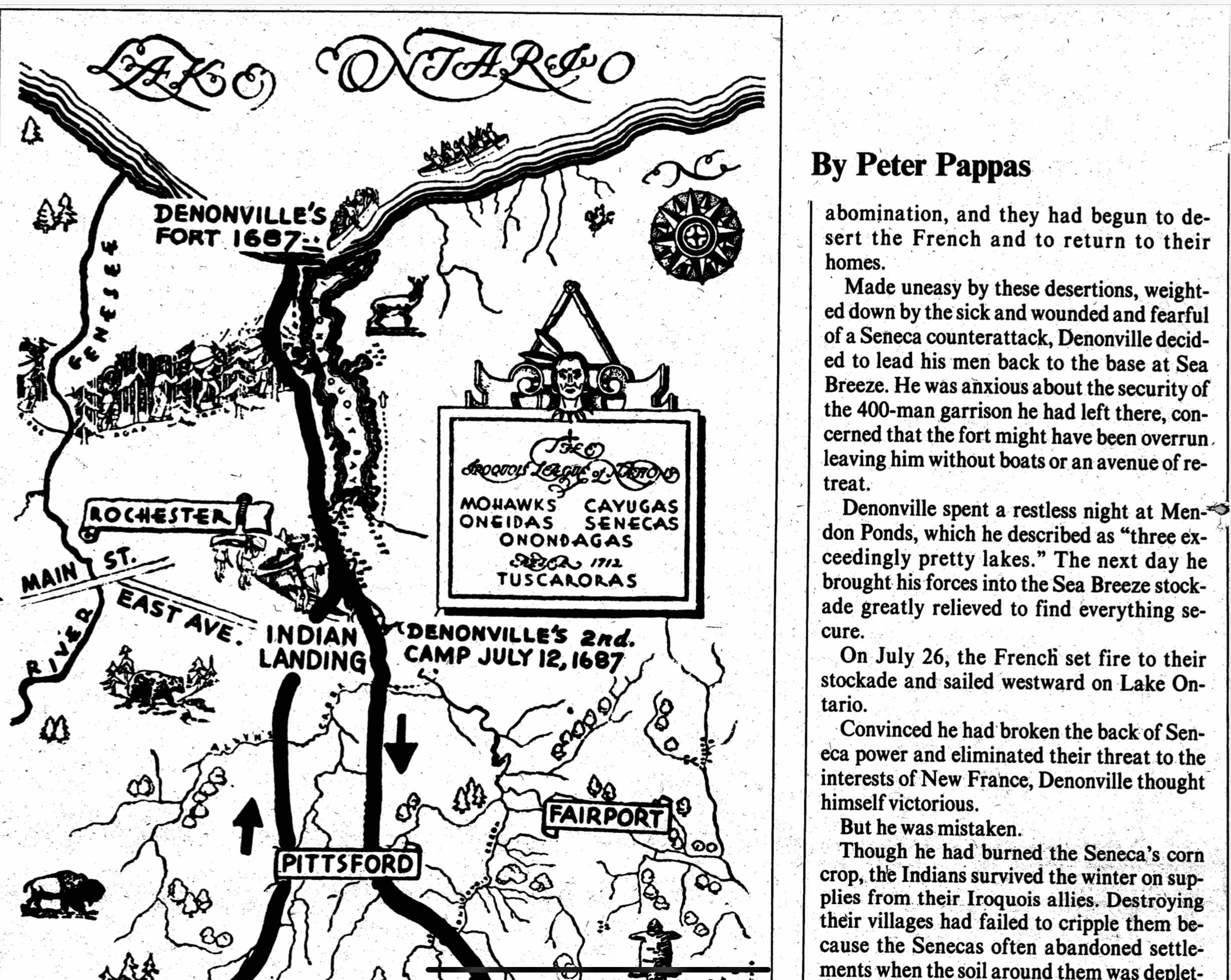 Over 25 years ago I published this piece in Upstate – a regional Sunday news magazine based in Rochester NY. I was a high school American history teacher intrigued with local history.  It was published on the 300th anniversary of the raid and filled with references to local landmarks and towns. My goal was to bring little known “international” incident to a largely local audience. (Looking back, I wonder if the subject matter was a bit grisly for the Sunday brunch table). While I’ve had a pdf copy of the original article on my website, I’m posting a text version here to make it more searchable. Despite my relentless overuse of commas, I have resisted re-writing it. 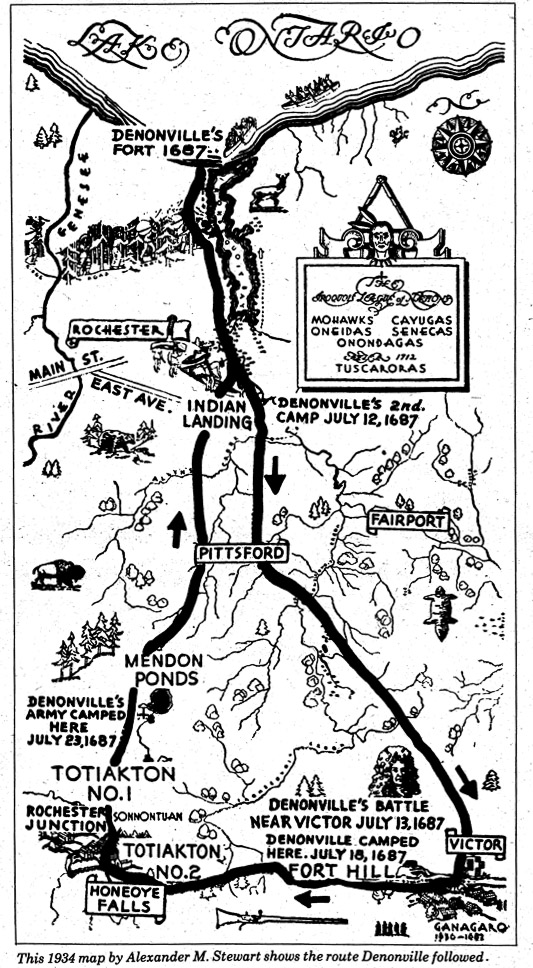 Three hundred years ago, on July 10, 1687, Seabreeze was invaded by the largest army North America had ever seen.

A 350-boat French Armada had left Montréal a month earlier bringing 3000 men and their supplies to the Ontario shore. Their goal: the destruction of the Seneca Indians of the Irondequoit Valley.

Unprepared to meet the invaders, the Senecas sent a small scouting party to the lake bluff at Seabreeze Park. They watched in silence as the French invaders dragged their flat-bottom boats on to the sandbar that today is lined with hotdog stands. On the narrow strip of land that separates Irondequoit Bay from Lake Ontario, the French set about securing their beachhead, and in the next few days built a crude rectangular fort, with a 10 foot high palisade using more than 2000 trees cut from the Webster shore of the bay.

To protect their boats from the Senecas and the intense heat, the French scuttled them in the shallows of the Bay. Soldiers also build scores of ovens to bake 30,000 loaves of bread to feed the troops.

The expedition leader was Jacques-René de Brisay de Denonville, son-in-law of one of France’s richest nobleman, an experience military commander and governor of new France, the large struggling colony the French had planted in the New World. It stretched from Montréal in a great arc all the way to the Mississippi Valley in New Orleans.

New France survived on the fur trade, an enterprise which was dependent on the Indians to help trap the retreating supply of animals has the white men push westward. The Senecas served as middlemen, their warriors terrorizing the other Indian tribes of the Ohio Valley to maintain a steady supply of pelts which they traded either to the French in Montréal or the English in Albany, depending on who paid better.

Wedged between rivals, Seneca country had become the political fulcrum of the eastern Indian America.

Because upstate New York was strategically located at the headwaters of the major river systems of the American Northeast, Seneca warriors and traders were able to use the rivers to reach colonists and other Indian tribes over an area of almost 1,000,000 square miles reaching as far south as the Carolinas and as far west as the Mississippi River. Wedged between rivals, new friends in the British colonies of the Atlantic Coast, Seneca country had become the political fulcrum of the eastern Indian America.

Denonville had brought 1500 French colonial troops and 1500 of their Indian allies to the Irondequoit Valley, as he put it, “to enter through the Western chimney of the Iroquois longhouse” to end Seneca interference in French plans for colonizing America. 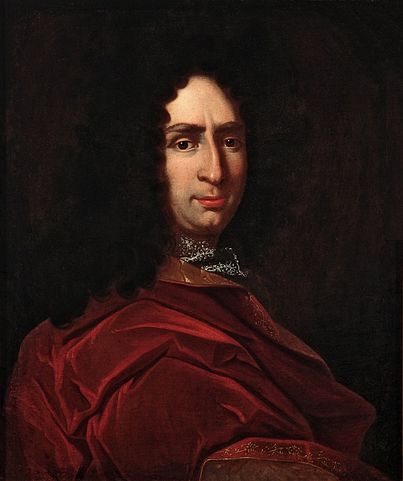 In the pale dawn of July 13, French troops knelt for Christian blessing as their Indian allies looked on. After breakfasting on bread and creek water they began the final leg of their march on the Seneca villages, following Indian trails which can be traced today by existing landmarks.

They worked their way down the west shore of the bay along what today is Interstate 590, passed Indian Landing near Ellison Park, then marched along Landing Road towards East Avenue. Guided by a map of Seneca trails prepared during an earlier, unsuccessful raid, Denonville was able to move swiftly through the rough territory.

News of the invasion spread quickly among the Senecas as their scouts reported the steady advance of the French columns. The Senecas had at most only 1200 warriors with which to face Denonville, but how many had fled or were elsewhere on raids and hunting parties was uncertain. They understood immediately that the Denonville’s aim was the destruction of their two major villages, Ganagaro, at what is now Boughton Hill, near Victor, and Totiakton, at what is now Rochester Junction, just south of Mendon Ponds Park.

The Senecas weren’t sure which village Denonville would strike first, and with their limited forces, defending both would be impossible. The Seneca strategy was to attack the French forces before they could reach the villages but until they were sure which route the French would take, they couldn’t prepare an ambush.

In their uncertainty and confusion, the Senecas had allowed Denonville’s men to pass safely through the terrain where they would have been most vulnerable – Indian Landing, Palmer’s and Corbett’s Glens. But they knew that when Denonville arrived at the fork where East Avenue meets Allen’s Creek his intentions would be plain – if he went left, he was taking the East Avenue trailed to Ganagaro; if he went right, it was the Clover Street trail to Totiakton.